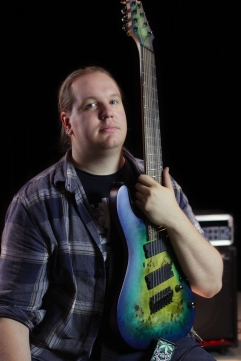 My name is Liam Taylor, I am a musician, music educator and online content creator based in Cambridge, UK. I have become known for my humorous but no-nonsense approach to music creation, which may sound oxymoronic at first.
I have a regular spot on BBC Radio Cambridgeshire discussing music creation and education with Richard “Spanners” Ready.
I currently seeking opportunities to build on this success, including: appearances on other radio, podcast or YouTube shows; writing featured articles for print or online media; collaborations on or sponsorships for YouTube content.
Other music-related appearances include interviews on the Stereo Stickman podcast; and for PopMyMind.com. Non-musical appearences include the Remain Indoors podcast and Val Verde Broadcasting on YouTube.

Primarily, I am a guitarist but have experienced with keyboards, synthesisers, percussion and have orchestrated large-scale and experimental scores.
I continue to write music for and perform in a variety of projects, most notably Blue Alatar – our debut album, Irradiated Hamster Alert, released in September 2018. In July 2019 I collaborated on a 5 track E.P. as The Musical Endeavour, One Weekend, released alongside a 30-minute documentary. I continue to release music as The Musical Endeavour.

The Musical Endeavour has been featured on Cambridgeshire’s BBC Introducing and Upload programs.

I have a wealth of experience as an independent music journalist, having written reviews, blogs and conducted regular interviews for the last 8 years.
In 2009 I founded Stabbed Panda Productions initially as a live events group. This grew to create educational resources for musicians, and act as a platform from which local artists could promote their material. I continued to write for the Stabbed Panda blog as it grew to become a well respected platform. Today it is known for the monthly Sexy Singles In Our Area blog and the Listen To This YouTube series hosted by Jay Plent, both of which shine a light on independent music talent.
Through Pro Tips and my comedy podcast, The Conversation Hat, I have conducted interviews with many musicians including Professor Elemental, Felix Martin, 12Tone, John Wheeler of Hayseed Dixie; as well as with comedians and online content creators including Ashens, Steve McNeil and Tony Law.

I’ve spent many years teaching guitar, up to Grade 8, (Rockschool), along with some bass guitar and music theory. In fact, my career on YouTube began by creating resources to assist my private students.

My day job for the last 5 years involves delivery of the tech aspects of GCSE music via Pro Tools. I’ve also had the great honour of accompanying students, (primarily in a safeguarding capacity), to perform at The Royal Albert Hall, the Music For Youth Festival in Birmingham and The Junction in Cambridge.
The older edutainment content on Stabbed Panda, including Music History and Pro Tips for Independent Bands continue to gain new viewers and are regularly used as classroom resources around the world.

My own YouTube channel, Liam Taylor Guitar, to which I upload guitar tutorials, professional musicianship advice and music production tips, surpassed 1,000 subscribers in 2018 and continues to grow. Between SPP and LTG, I have become known for a practical, no-nonsense approach to music creation and management, and encourage others to hold professionalism, good humor and positivity above everything else.

Odd Created Ltd was formed in 2018 as an overarching brand under which Stabbed Panda Productions, Liam Taylor Guitar, (and others), could function. The company offers bespoke media creation for niche businesses. In addition to being it’s director, I also write the majority of bespoke music for projects and produce our voiceover work.

I am is currently seeking opportunities to discuss the following on public forums:

My professional goals in doing so are:

My personal goals are to: