This is a staple blues / rock / metal trick that you will have heard at some point as a listener. If you need to, refresh your memory on the Bm scale and the ideas outlined in my first String Bending lesson.

For the first bend you’ll want your first finger fretting the target pitch, which is at the 9th fret of the B string. Your second or third finger will start on the 7th fret of the G string.

In the example below, notice that the letter “b” is used to indicate a string bend, and the number that appears in brackets next to it is the location of the pitch you’re aiming for. This is what we call a Full-Tone Bend.

Here you’ll want your first finger fretting the target pitch again, which is the 9th fret of the E string. This time your third or fourth finger will start on the 8th fret of the B string. 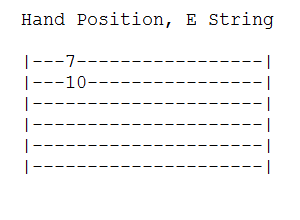 This is the same deal as the previous bend, it’s just taking place on a different fret. You can also apply some vibrato once you’ve hit your target pitch, as indicated by the “v”.

Remember, when you bend a note, usually the listener will hear the target pitch as the one that’s been affected rather than the starting note, which is pretty much the opposite of what we’re experiencing as the performer. It’s important to get around this idea early on as it can hold you back later.

That being the case, you shouldn’t worry too much about the starting pitch of your bend – provided the target pitch is solid and you’ve got good intonation, no one will really mind where the note started.

Once you’ve got solid intonation and your fingers are getting used to the idea of doing a silly amount of bending work, try playing around with slackening-off the bend here and there, or really slowing it down you to get a very tense pitch raise. Add vibrato here and there as well for a bit more flavour.

The next step would be the advanced bending techniques of Over Bending and Pre-Bending.